Eclipse is a celestial feature that has amazed and awed the mankind through out history. In earlier times, it was considered an eccentric event that intruded the natural cycle of day and night. Consequently, most of the folklores presented the eclipses as ominous and sinister heavenly phenomena. Religious and cultural traditions have proposed special prayers and pleas at the time of eclipses, so that luminaries could defend themselves against heavenly dragon.

In the purview of astrology too, eclipses are unavoidable phenomena having far reaching impacts, especially on mundane affairs. However, they do cast good or bad effects on individuals when fall near the longitude of radical planets or house cusp of natal chart. But as a whole, Vedic and Western astrological treatises delineate eclipses as a precursor of significant global and national events.

Indian astrology divides the eclipses into ten different kinds, according to various types of shadow at the time of occurrence.

Whereas modern astronomy considers six types of eclipse, depending upon magnitude of Moon’s shadow and position of Earth’s surface.

Celebrated Varahamihira thoroughly delineated the astrological impacts of eclipses on mundane affairs in Chapter 5 of his magnum opus Brihat Samhita (BS). There he also discusses the visibility and shape of eclipse disc in detail. Later he gives the results of eclipse occurring in various lunar months and signs. One of important principle he enunciated is “should there be two eclipses (solar and a lunar) in same (lunar) month, kings would be destroyed as a result of revolt; and there would be bloody battles.” (BS Chapter 5, Verse 26)

According to Varahamihira, eclipse yields more malign results when any other transiting natural malefic planet(s) conjunct or aspect the under-eclipsed luminaries.

Ptolomy, the noted western authority on astrology, observes, “if the place of eclipse falls on the eastern horizon, this signifies that the beginning of the predicted event is in the first period of four months from the time of the eclipse and that its important intensifications lie in the first third of the entire period of its duration; if on the mid-heaven, in the second four months and the middle third; if upon the western horizon, in the third four months and the final third.” (Tetrabiblos, Book 2, Chapter 6)

Robert Cross, better known as Raphael, quoting the Ptolomy, eclipses have most effect in those countries where they are visible, and more especially on the countries and cities ruled by the signs in which they occur.

In practice I have also found, eclipse leads to definite and deep rooted outcomes on national affairs when falls on/near the bhava-madhya (cusp) of non-vacant house OR/AND over radical planet/saham of mundane chart. The result may turn severe when eclipse occurs on the weekday of birth.

I've also seen the governments, elected or formed in between two adjacent solar-lunar eclipses of same month, usually come to end before completing their tenure.

Besides mundane results, every second book of astrology maintains a few pages on result of eclipses on natal chart. Famed jyotisha commentator R. Santhanam penned a brief but useful chapter on Eclipse in his "Essential of Predictive Hindu Astrolgy". He holds that;

a) An eclipse, gives auspicious results if it falls on the cusp of kendara (1st/4th/7th/10th) or kona (5th/9th) you may wonder to read it, as most of the astrologers describe this signature a bad omen.

On Wednesday, July 22, 2009, a central total solar eclipse occurs in parts of Pacific and Asian region. The said eclipse will be longest duration of totality (up to 6 minutes and 39 seconds) in the 21st century. It will be visible in , , , , , and . Among them China will have long lasting impact as a result of said eclipse since the path traverses over its capital Shanghai. Following , and will too affect as eclipse will be clearly visible in most their cities. However, , , , , and will partially suffer.

But as whole, this eclipse may not result in mega disaster, war or global unrest, since no natural malefic aspects Cancer on July 22, 2009. Varahamihira says “if the eclipse should also be total and the eclipsed orb is aspected by natural malefics as well, there would be famine and pestilence all over the country.” (BS Chapter 5, Verse 27). Nonetheless, the ashubh dhana argala of Saturn upon Sun at the time of eclipse can not be ignored.

:
is traditionally associated with zodiacal sign of Libra, but the emergence of took place in 1949 when Capricorn was ascending. July 22nd eclipse occurs in 7th house of where Mars (a natural as well as functional malefic) is sitting in debilitation. 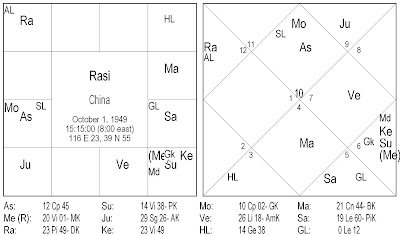 But fortunately eclipsed-luminaries fall in Pushyami nakshatra while radical Mars of China is in Aslesha nakshatra. In spite of that, occurrence of eclipse in Cancer near radical Mars is not a good omen. It may lead to ethnic riots and communal strife, as here natal Mars owns the 4th house and under influence of Moon. Additionally, there is a fear of unexpected flood and shortage of agricultural output. Visibility in the capital city will surely create trouble for the government on account of these unwanted happenings. Nonetheless, involvement of 7th house, 11th lord (Mars), 7th lord (Moon) and Rahu (who is in trine to Cancer) shows new development at external affairs, especially related to and .

July 22nd solar eclipse downwardly transects the Indian geography from north-east to south-west. In the morrow, the eclipse will be visible in , , , , Soorat and adjacent towns. It will be partially observable in and Mumbai too. However, keeping in view the monsoon season during July, probability of observing a clear view of sun is quite feeble. Astrological sources appear vague over this problem, whether non-visibility due to clouds and weather conditions modify the eclipse results or not. 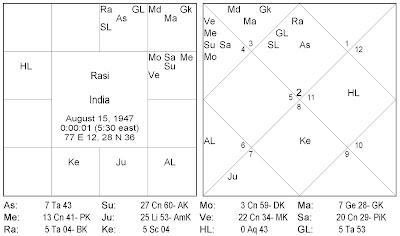 Anyway, the pivotal point of eclipse in Indian horoscope is the 3rd house and 3rd lord (Moon), despite there is an assemblage of four other planets, viz.; Sun, Venus, Saturday and Mercury. But rest of the grahas (except Mercury) is in Aslesha nakshatra.

In mundane astrology, 3rd house rules over means of communication, telecom industry, railway, transportation, media and newspapers. While Cancer associated with water, rivers, naval affairs, and masses in general. But the question is whether understudied eclipse casts favourable or unfavourable impact through these significations? Let’s dig out the answer. Being an upachaya, third house is assumed a haven for transit of malefic planets and malefic heavenly occurrences. And there is no confusion over it. But involvement of 3rd lord (one of the trishadaya bhavapa) renders the situation bit impure. Secondly, falling of eclipse near radical Moon – a naisargika karaka of janta (plebeian), is surely an unwelcome signature. Thirdly, the navamsa of eclipsed luminaries is Leo that coincides with the 4th house of (as per rasi-tulya-navamsa).

Consequently, it will yield mixed-cum-malefic result for . But in coming months, the burden of suffering will fall on common man rather on government. Public may come across unsatisfactory perhaps crumble situation of transportation due to hike in fares. Print or electronic media will excessively seek to unveil scandals and rumours. Railway department may see a deficit as well as increasing accidental cases. And there may be demise of famous author or columnist. At economic front, production of autumnal crops and their prices will not be satisfactory since July 22nd solar eclipse occurs in early morning. While at official level, government may start fresh negotiations with neighbouring countries. In the oath taking chart of Manmohan Singh, said eclipse fall in 9th house near Ketu that may bring forth government’s involvement in judicial case, establishing new anti-terrorism frame work, but differences with religious segments. 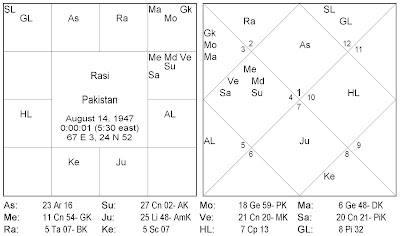 In , July 22nd eclipse will be partially visible in southern of and city of . Fortunately, there is no planet or cusp in Pushyami nakshatra except Mercury. Note the weekday lord of eclipse is Mercury (same as birth day of ). This makes the occurrence of eclipse quite significant as far as significations of Mercury and 3rd house are concerned. Resultantly, effect will be more or identical to , regarding public and means of communication. At government level, President Zardari may have to confront severe criticism from media and losing support of masses.